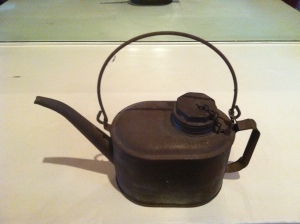 This tallow pot belonged to dad, Larkin Watson Buckland, Jr. (1915-1993) and he used it during his days on the steam engines working both as a fireman and then an engineer on the Norfolk & Western. 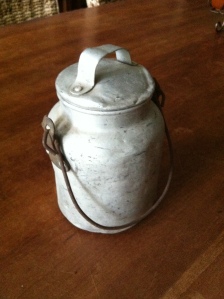 Vintage milk can (individual size) belonged to my grandfather, L.W. Buckland, Sr. He used to take it in his lunch.

Gift to me from Grandmother Buckland before she passed away in 1960.

Belonged to Dad when he was a boy.

Engine pins given to Lucille Buckland and all wives of engineers. The men were give tie tacks and cuff links. 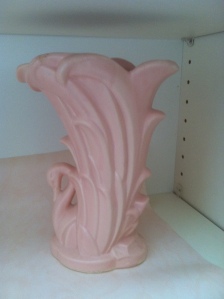 Turn of the century, primitive pie safe given to Asa & Altha Davis by J. Henry Jessee when they got married in 1902.

Vintage barber brush (circa 1920-1934) belonged to the railroader. He went to barber school in Columbus, OH when he was 19. 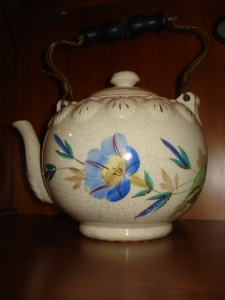 Little girl and her poodles – given to me by Grandmother Altha Davis when I was young.

3 thoughts on “A Personal Family Collection”