The Railroader, L.W. Buckland, Jr., recounted to me his relationship with the tragedy many years ago and kept a copy of the Bluefield Daily Telegraph that reported the accident. As dad told me the story, it was with heart-felt words and with a look in his eyes that he knew he had been saved from death on that dreadful day in 1946. There is no doubt in my mind, and I believe he absolutely understood, that it was by divine intervention that he was not a part of the crew onboard Engine #604 the Powhatan Arrow the day it wrecked in Powhatan, WV.

As a young fireman on the Norfolk & Western Railway, Dad said that he had been working this run from the extra board while the regular Fireman, Beecher Lawson was marked off on vacation. On the day of this accident, the fireman marked back up for his regular assignment as fireman on the prestigious passenger train, relieving L.W. from the job and back to the fireman’s extra board. 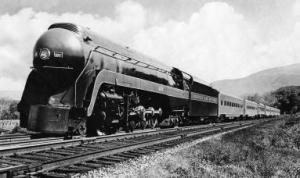 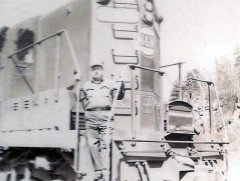 The Powhatan Arrow made it’s maiden voyage in April of 1946, just two months prior to this accident. Steam engine crews enjoyed the speeds they could attain on those engines and as is no surprise, the cause of the accident was listed a “excessive speed on a curve”. The second picture is of the railroader in later years and an enginemen on a diesel.

According to: (source-Bramwell,WV) Two Bluefield railroad men were killed and two others injured in this Norfolk and Western train wreck at Powhatan, West Virginia, 18 miles west of Bluefield, WV. Engineer Grover C. “Nap” Roberts and fireman Beecher Lawson were killed when the eastbound crack stream-liner “Powhatan Arrow” left the tracks…Eleven passengers were hurt in the wreck. This deluxe train was eastbound from Cincinnati, OH to Norfolk, VA. Several thousand people from Mercer and McDowell counties were attracted to the wreck. It was reported that automobiles lined both sides of the highway for more than a half mile. The “Powhatan Arrow” had made it’s maiden run on 27 April, 1946. 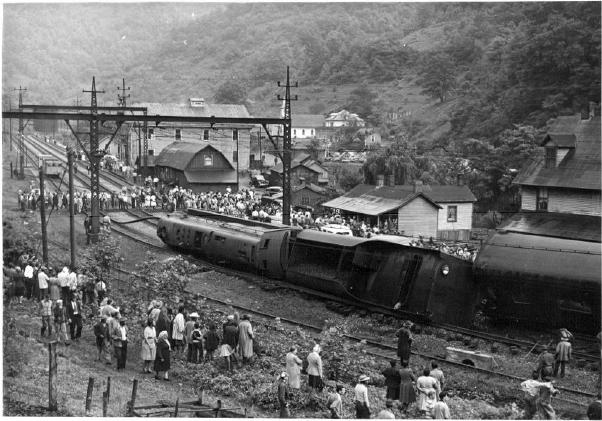