Cousin Richard was one of the most pleasant relatives that I remember. He was kind and encouraging to me and complimentary of my children. I loved his smile. Richard seemed more like an uncle, rather than a cousin since he lived many years with the Buckland boys at Falls Mills, having lost his parents at a young age.  My paternal grandmother, Mary Jane Davidson Buckland and his mother, Nannie Crockett Davidson McHaffa were sisters. Richard would have been 89 today and we still think of him often. And yes, he was a railroader, as was his father. Richard had a 42-year career as a Locomotive Engineer with the Norfolk and Western and Norfolk and Southern Railroad. 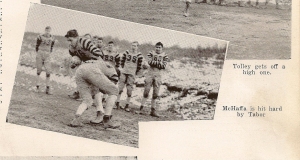 Richard played football at Graham High School and served his country in the military. He married Jessie Odom on October 4, 1950 in Falls Mills, Virginia. They had three children and for as long as I can remember, they lived out Hwy 52 in Bluefield, WV.

MCHAFFA, NATHANIEL RICHARD – 87, passed into the arms of his Savior on Monday morning, August 13, 2012, after a short illness. He was a resident of Trinity Hills Senior Living, Knoxville TN, since November of 2011, having moved from Bluefield, WV. Awaiting him were his wife of over 50 years, Jessie Odom McHaffa; his parents Nathaniel Ezra and Nannie Crockett Davidson McHaffa; his brother, Charles Hiram McHaffa, and his sister, Mary Ruth Rutherford, as well as cousins with whom he was raised. He is survived by son, Richard and wife, Debbie of Stuarts Draft, VA; son Michael and wife Debbie of Bluefield, VA; and daughter Eva Pierce and husband, Les of Knoxville, TN; grandchildren Libbie (Tony), Steven, Kristin (Micah), Evan (Sara), and Lance; also 5 great-grandchildren, extended family and friends. Mr. McHaffa was born on September 27, 1924 in Williamson, WV. He was a football letterman and graduate of Graham High School. He served in the Army Air Corps during World War II, stationed in Puerto Rico and Trinidad. He worked briefly as a Surveyor for the Virginia Highway Department, before beginning a 42-year career as a Locomotive Engineer with the Norfolk and Western and Norfolk and Southern Railroad. He was a longtime member of the American Legion, Riley Vest Post. He enjoyed hunting, fishing, high school and college football. Receiving of friends will be held from 5:00-7:00 p.m. Wednesday evening, August 15th, at Centerpointe Baptist Church, 2909 North Broadway, Knoxville, TN, with a Celebration of Life to follow. Visitation will be held at Craven-Shires Funeral Home, Bluefield, WV, Thursday, August 16th from 6:00-8:00. A funeral service will take place Friday, August 17th at 1:00 p.m., with entombment to follow at Woodlawn Cemetery in Bluefield, WV. Family and friends will serve as pallbearers. In lieu of flowers, Mr. McHaffa requested that memorials be made to A Hand Up for Women, P.O. Box 3216, Knoxville, TN 37927.